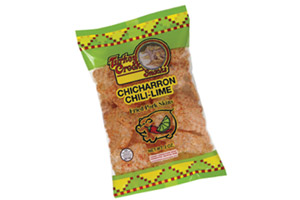 For many consumers, graduation parties, reunions and other summer get-togethers with family and friends are the perfect occasions for a pig roast. Guests often reminisce about the taste of the succulent meat and crispy skin long after the event.

Shoppers, particularly men, can now satiate their cravings for crunchy pig skin in a big way any time of the year with Lee’s Pig Skins Colossal Cracklins, produced by Rudolph Foods Co. Inc., Lima, Ohio. “It’s actually the biggest cracklin on the market,” says Mark Singleton, vice president of sales and marketing for Rudolph Foods, which also offers Colossal Cracklins under the Pepe’s El Original and Southern Recipe brands. “We thought the consumer would react well to a bigger presentation of the product. It just looks like a man-sized chunk of pork.”

Colossal Cracklins are made from pork fat with attached shoulder skin and come in Original, Bold & Spicy BBQ and Chile Limon. They’re available in 1.34- and 3.5-oz. bags that retail for 99 cents and $1.99, respectively, at major retail outlets across the South and Southeast and regions with many Hispanic consumers (who traditionally eat a lot of pork).

“You can’t pick up a [Hispanic] food magazine without reading about pork,” says Singleton. “Hispanic consumers not only use our pork rinds as a snack, they use them as a food ingredient in meal preparation.”

This bodes well for Rudolph Foods, given that its No. 1 consumer is Hispanic, according to Singleton, and that this segment of the population is continuing to grow.

Despite their popularity, pork rinds are considered by some consumers to be an unhealthy snack. “[Our products are] zero carbs and zero trans fat,” says Singleton. “They’re a really simple, natural product—one of the oldest snack foods. The product has such a history with people all over the world. Any place that had a consumption of pig or swine had a consumption of pork rinds, and that remains true today. We’re bringing back part of most people’s history.”

Turkey Creek Snacks’ pork rinds and cracklins also are “strong with the Hispanic [consumer],” according to Randy Oglesbee, sales manager for the Thomaston, Ga.-based company. No doubt the company’s 2010 addition to its pork rinds line—Chicharron Chili-Lime Fried pork skins—are popular too, with these consumers and other pork rind lovers.

The tasty snack is made with pork skins, seasonings and natural and artificial flavors. It is available nationwide in 2-, 3- and 4-oz. bags with suggested retail prices ranging from 99 cents to $1.59.

History shows that getting together with friends and family during the summer months and enjoying foods prepared over an open flame, like roast pig, is one of America’s favorite pastimes. During the rest of the year though, consumers can choose from a variety of flavor-packed pork rinds and cracklins to add a dash of summer to any meal or snack occasion.

Editor’s Note: To learn more about these and other new pork rind products, go to www.snackandbakery.com and check out our online new products section.