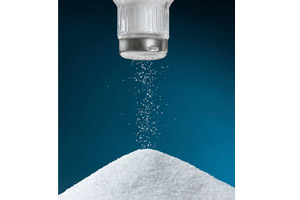 Salt is a necessary and enjoyable ingredient that’s often vilified. Although the research is not completely supportive, the Institute of Medicine (IOM), Washington, D.C., and 2010 Dietary Guidelines for Americans (DGA), emphasize the need for Americans to reduce their sodium intake.

The 2010 DGA recommended cutting our intake by one-third, from 3,300 to 2,300 mg. a day, and even more for a significant proportion of Americans. Many of us fit into the huge category of people who should consume no more than 1,500 mg. daily—those with high blood pressure, diabetes or chronic kidney disease, those who are over 51 and all African-Americans.

There is even some support for eliminating the Generally Recognized as Safe (GRAS) status of salt. On Jan. 31, the World Health Organization (WHO) stated that adults should consume less than 2,000 mg. of sodium, or 5 g. of salt, and at least 3,510 mg. of potassium per day. This new recommendation is considerably lower than what we are currently consuming.

A 2011 study showed, however, that sodium reduction in nonhypertensive subjects, or even those with hypertension, did not reduce all-cause mortality or heart disease. A more recent analysis of six randomized trials concluded that a low-sodium diet (1,800 mg. daily) compared to a fairly normal sodium diet (2,800 mg. daily) significantly increases morbidity and mortality in systolic heart failure.

Also, iodized salt is one of the best sources of iodine in the U.S. food supply. A 2010 study published in the American Journal of Hypertension showed that American women, but not men, were likely to be iodine-deficient if they were on a reduced-sodium diet.

Three studies in the March 2013 issue of Nature magazine linked high salt intake to an increase in some autoimmune diseases because of the effect on gut health. However, much of the evidence was from in vitro (test tube) and in mice. Researchers now need to duplicate the findings in humans, so until then, I am taking this theory “with a grain of salt.”

The data used in the 2010 DGA committee report (National Health and Nutrition Examination Survey [NHANES] 2005-2006) shows that bread is the largest single source of sodium in Americans’ diet, at 7.3%. While individual servings of bread and grains aren’t high in sodium, the amount we eat and is recommended is cumulative over a day.

Good-tasting breads containing lower sodium are available. It’s important to remember, however, that sodium in bread isn’t just there for taste. It’s crucial to inhibit acid-producing bacteria, strengthen and tighten the gluten in dough, control fermentation and enhance leavening and crust color.

In 2012, the American Bakers Association (ABA) published a white paper that included marketplace reduction trends over the last two years, demonstrating that the average level of sodium in bread is down 6% and in cake down 4%.

Regardless of the conflicting evidence on low-sodium diets versus high-sodium diets, it’s still prudent that Americans reduce their sodium intake. They can do so by reading labels and selecting products with the lowest sodium levels, as long as those products have an acceptable taste and texture. Manufacturers can continue to reduce sodium gradually so that consumers’ taste will adjust. We have seen marketplace failures of products with large sodium reductions, including breads, crackers and soups.

Kati Mora, a registered dietitian, has some easy ideas that anyone can use for reducing sodium:

• Season vegetables and meats with low-sodium herbs and spices instead of salt.

• Consume more fruits and vegetables that are naturally low in sodium and are often high in potassium, an underconsumed nutrient.