Where Did Bagels Go? 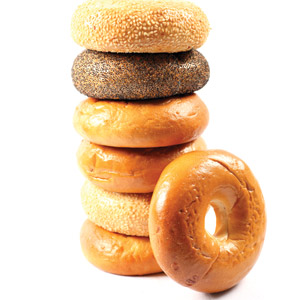 I recently read about how Price Chopper supermarkets is celebrating its 20th year of baking fresh, New York-style bagels and bialys daily, in-store. The store is offering some insight into the process of hand crafting authentic bagels and a chance for customers to win free bagels for a year. It got me to thinking about how much I have always loved bagels and how few bagel shops there are in my area these days.

Bagel shops seem to be disappearing in some of the big cities in the U.S. Several bagel shops in my area that offered numerous varieties have closed after decades of popularity. In the Midwest, bagels have experienced a major decline. In the central region of the country, consumers tend to purchase more donuts. Out East, bagels and muffins sell more. The South region had the largest decrease in bagel sales compared to other regions, down 2.6% in 2011 from the previous year, according to sales reviews from Perishables Group Inc., a Chicago-based fresh food consulting firm.

Fresh-baked bagels today are finding a home in supermarkets. “Price Chopper was ahead of the trend in the increasing popularity of bagels,” observes Mona Golub, Price Chopper’s vice president of public relations and consumer and marketing services. “Twenty years ago, authentic, high-quality bagels made from scratch using Price Chopper’s elaborate process were few and far between. Today, in a supermarket setting, it’s rare to find product of this high quality.”

I also asked our noted 2012 Wholesale Bakery of the Year, Masada Bakery, which produces bagels in several varieties, about whether they had noticed a slight change in bagel distribution. Neil Ullman, vice president of operations, agrees: “Bagel shops don’t seem to be as popular these days—you can get bagels in supermarkets, but it seems to me that a lot of the mom-and-pop groceries that used to have them are disappearing.”

Bagels have been called “a bread for the ages.” Their origins go back hundreds of years and are traced back to 17th century Poland, as the hole in the center could be used to thread string or dowels, grouping them for easier handling and transportation and making for appealing sale displays.

Bagels saw more general use throughout North America in the last quarter of the 20th century, due at least partly to the efforts of bagel baker Harry Lender, his son, Murray, and Florence Sender, who pioneered automated production and distribution of frozen bagels in the 1960s.

Overall, supermarket bagel sales were on the rise from 2006 through 2008, but have leveled off since 2009. The bagel category includes assorted/variety, regular, gourmet/large, mini/bite/chunk and other bagels. The national average bagel contribution to the in-store bakery was 2.9% in the 52 weeks ending April 30, 2011, losing 0.1% share from the previous year, the Perishables reviews note.

Perhaps one reason that bagels are losing favor or are being usurped by other baked goods is that they’re pretty high in calories—let’s admit it. So some manufacturers are trying to find new ways to cut the calories and size of some bagels. Bimbo Bakeries and Flowers Foods launched thinly sliced bagels that have less than 150 calories each. Bagel thins are expected to help increase sales in the bagel category.

Lower-carb and lower-calorie diets also figure into the issue. So far, bagels don’t fit into a lower-carb scheme, though they could be portion-controlled, though I don’t know how you can remove calories from a bagel. But the art of making New York-style bagels is truly that: An art. Bagels were artisan creations long before the term came into being. Usually boiled for a short time in water first and then baked, which results in a dense, chewy, doughy interior and a browned and sometimes crisp exterior, bagels are often topped with seeds baked on the outer crust. They taste so scrumptious and obviously look like no other bread. We need to keep them alive and maintain them as a thriving part of the baking industry. They’re too delicious to disappear any other way but to be eaten.

State of the Industry: Bagels, Muffins, Pies—Three Under Par