The United Soybean Board’s 22nd annual Consumer Attitudes About Nutrition study—which reveals consumer perceptions about diet, fats, oils and purchase drivers—indicates Millennials consume soy foods and beverages more often than adults in general, with 50 percent eating soy at least once a week versus 38 percent of all adults. The study compares Millennials (ages 18 to 34) to the total sample of participating U.S. adults, 18 years and older. 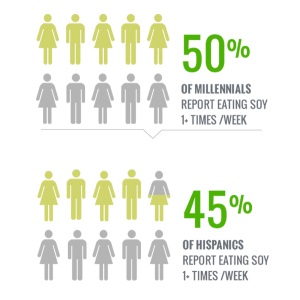 Forty-two percent of Millennials are aware of specific health benefits associated with soy foods such as tofu, edamame or soy milk. They are also more likely to seek out products made with soy because of the nutritional benefits they associate with it. “Millennials have a heightened awareness of the impact food and beverages have on their health,” says Amy Hendel, registered physician assistant and Soy Connection consultant. “With a spotlight on diseases such as cancer, high blood pressure and diabetes, Millennials seek healthy foods and look to soy.”

Similarly, 45 percent of Hispanics consume soy at least once a week or more, according to the study. Nearly six in 10 Hispanics say it is “very important” that the foods they eat are produced using methods and practices that contribute to the long-term health of the environment. Given the information that most vegetable oil sold is U.S.-grown 100 percent soybean oil, 59 percent of Hispanics believe soybean oil is healthier than they thought. The study also shows that both Hispanics and millennials view the role of biotechnology in food production more positively than adults in general, especially those already familiar with the term.

“Excitement around farm-to-fork meals has grown in recent years,” says Hendel. “Consumers are interested in where their food is from and how it is produced, even when it comes to widely used crops such as soybeans.”

The amount of consumers who report eating soy once a week or more increased by 14 percent from 2010, and consumers are more likely to seek out products specifically because they contain soy. In addition, compared to 2014, more adults are aware of health benefits associated with soy foods. Protein is the most recognized health benefit.

For more information on the full results of the survey, visit SoyConnection.com/BITE-2015.

International Symposium on Bread, On the Rise, to be held April 26-28 in Charlotte, NC

Survey: Probiotic use on the rise as digestive health moves up the agenda