On Dec. 19, 2014, in a backyard flock of mixed poultry in southern Oregon, a highly pathogenic avian influenza (HPAI) H5 outbreak was recorded. A crushing 180 days later, on June 17, 2015—the date of the last recorded detection—more than 48 million birds were dead as a result of the outbreak.

This is an event that the food industry—and particularly bakers—will feel for years to come.

HPAI H5 impacts wild birds, backyard flocks and commercial egg producers alike. It was likely carried over by Eastern Hemisphere birds from Asia and transmitted to Western Hemisphere birds via intermingling in migratory flyways. The virus subsequently spread rapidly—apparently through multiple points of transmission. Officials believe the spread of HPAI H5 from one bird to another might include direct contact with an infected bird, or perhaps through multiple points of potential indirect contact via introduction of the virus to a farm through humans, vehicles, etc. Animal health experts continue to evaluate how the disease has spread.

Although USDA has tested vaccinations, it has determined that additional criteria must be met before a vaccination can be approved for emergency use.

While the risk to people is considered very low—with no recorded cases of HPAI H5 recorded anywhere in the world—the impact to egg producers and the users of commercial egg products continues to prove devastating. Farm populations have been decimated. Supplies of commercial egg products have dwindled. Prices have spiked. And the food industry continues to seek answers (see “Avian influenza’s impact on the bakery industry” for our initial report on this crisis).

According to USDA, data to date on the 2015 avian influenza outbreak includes:

The Midwest saw the worst of the outbreak, with a handful of states particularly impacted:

The egg products industry bore a terrible brunt. In Iowa, Minnesota, Nebraska, Wisconsin and South Dakota, the United Egg Producers (UEP) notes that more than 35 million egg-laying hens and 6 million pullets (young hens not yet in production) were affected—a number that equates to about 12 percent of all layer hens in the U.S. and more than 30 percent of layers dedicated to the egg products business.

As a result, many manufacturers across the food industry, including bakers far and wide, have sought application-specific solutions to extending or replacing egg products (see “Supply-chain reactions to the avian influenza crisis” for more information).

But the egg industry maintains significant strength, and repopulation of impacted farms has already begun. According to an Aug. 26 release from UEP, egg producers that found themselves affected earliest in the path of outbreak have completed the required APHIS disinfection measures and have started bringing young hens back onto their farms.

Nevertheless, Chad Gregory, president and CEO, UEP, notes that it will be at least 12 to 18 months longer before egg production returns to levels seen before the HPAI H5 outbreak. Also, it could potentially take up to 80 weeks to fully repopulate some farms due to the age-staggering of layers required to maintain consistently available supply on commercial egg farms (see the “Repopulating America’s Egg Farms” infographic below). This repopulation step remains hampered by a short supply of pullets in relation to the layers impacted by the HPAI H5 outbreak, plus the fact that the outbreak was detected on some breeder and pullet farms.

While news that the outbreak has remained contained since the middle of June is welcome, APHIS expects the outbreak to potentially resurface as waterfowl begin seasonal migration from Canada to all points south in the coming weeks and months.

To help mitigate risk, APHIS held a “Fall Planning Workshop” on June 30 and July 1 to develop a framework of updated best practices and plans to manage the potential resurfacing of HPAI H5 this fall, including strategies for “worst-case scenario” situations (see “Highly Pathogenic Avian Influenza Fall Planning Workshop: Summary and Next Steps” for complete details).

Taking any available steps to prevent or minimize future outbreaks remains a top industry priority. The U.S. egg industry has worked aggressively to recover from the devastating impact stemming from HPAI H5. According to UEP, while this year’s HPAI outbreak centered on egg farms in the Midwest, egg farmers from coast to coast have been working to increase biosecurity measures, including: 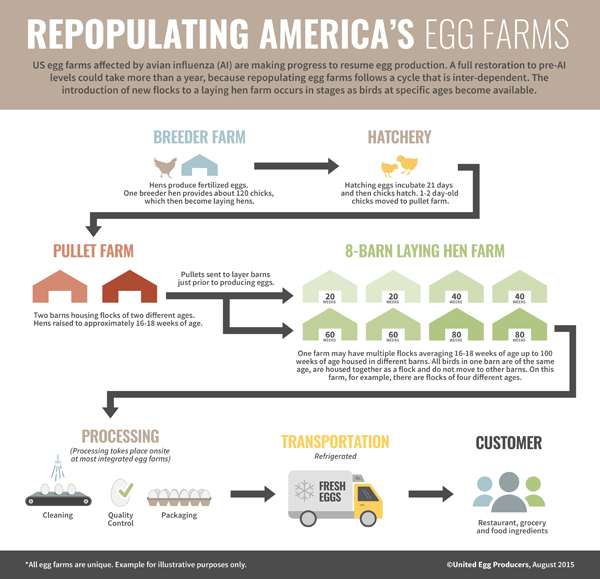 The lingering impact of avian influenza on the bakery industry