Sustainability leadership in the food and beverage industry

Consumer engagement in sustainability continues to increase. To that end, many consumers not only look to corporations for leadership in this area, but are also drawn to companies specifically because of their sustainability efforts. In recent years, food and beverage companies have made significant investments in corporate social responsibility (CSR) initiatives and communications.

Many consumers believe that what companies stand for and how they act is often as important as what they sell. Therefore, sustainability efforts are an important part of CSR, along with social and societal initiatives.

NMI is a leader in consumer insights to the LOHAS (Lifestyles of Health and Sustainability) market. Since 2002, NMI has conducted an annual research study that provides an abundance of data regarding consumers’ LOHAS related attitudes and behaviors. NMI has developed a consumer segmentation of the general population which identifies five distinct consumer segments: LOHAS, NATURALITES, DRIFTERS, CONVENTIONALS and UNCONCERNEDS.

LOHAS consumers, representing 22 percent of U.S. adults (54 million people), are the thought and action leaders. Their strong attitudes toward personal and planetary health drive not only their own behaviors, but also have impact and influence on other consumers, as well.

Consumers, and particularly LOHAS consumers, are interested in learning about a wide array of sustainability actions taken by corporations. Increasingly, however, many consumers go a step further and demand that the companies they patronize demonstrate strong levels of responsibility and commitment.

Unfortunately, only 8 percent of consumers currently believe that corporations lead the way in protecting the environment. In contrast, consumers are most likely to believe that individuals (44 percent), nonprofits (42 percent) and volunteer groups (41 percent) are succeeding in this regard. However, over half of consumers feel that corporations should be doing more to protect the environment, a clear indication that there is quite a bit of room for companies to expand their efforts. But it is imperative that companies be clear, straightforward and transparent as they move forward. Only about half of consumers say they trust food and beverage companies to follow practices that promote sustainability and protect the environment. 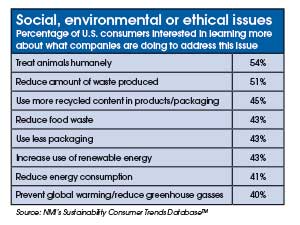 There are many different types of CSR programs, but the overarching theme is a company’s continuing commitment to be responsible and work in ways that serve to improve social, ethical and environmental concerns. While it is sometimes difficult to quantify the benefits of sustainability efforts, NMI’s research indicates that they have the potential to translate into favorable consumer behavior. Consumers are more interested than ever in aligning their personal values with the brands they buy, raising the bar for companies to clearly define and articulate their values and, as a result, sustainability efforts can have a positive effect on the bottom line. The programs themselves can be effective in spreading goodwill, which can result in increased purchasing behavior. This is especially true for LOHAS consumers, 49 percent of whom state that they would be willing to pay 20 percent more for products made in an environmentally friendly and sustainable manner, compared to 27 percent of the general population.

Additionally, companies can save money by operating more efficiently by repurposing waste, lowering energy costs, recycling, etc. As consumers move to put their dollars where their values are, sustainability is increasingly a vital element in business growth.

The importance of sustainability in foods and beverages

The importance of sustainability in foods and beverages

Understanding the multiple facets of sustainability in the food industry