How Americans' popcorn preferences reveal more than their snacking habits

A new study of 2,000 revealed that people who prefer their popcorn salty and those who prefer sweeter flavors differ in their movie tastes as well.

The census-balanced survey revealed that while fans of salted popcorn flavors aren’t necessarily, well, salty, their sweet popcorn counterparts do appear to be sweeter on romance.

Although action movies were the most popular genres among both salty (19 percent) and sweet (22 percent) popcorn preferfers alike, the runners-up in each category differed tellingly.

Commissioned by the Popcorn Board in celebration of National Popcorn Day and conducted by OnePoll, the survey also examined how some cinephiles are shaking up their at-home movie nights this winter.

While the postponement of movie awards shows means that awards season 2021 won’t arrive until the spring, American movie fans might just be more prepared than ever this year.

Six in 10 respondents say staying at home more often during COVID has turned them into a “total film buff,” according to new research.

Moreover, 55 percent say that the awards season postponement will actually allow them to see more eligible films than they ever have before.

Sixty percent, in addition, say they’ve watched more films in 2020 than any other year in their life.

The survey also revealed a burgeoning trend: “virtual movie nights,” in which people watch a film with friends and family while video chatting.

The average respondent plans to host eight such events this winter.

When asked which components respondents felt were absolutely essential for the perfect movie night, chocolate (37%) and cozy blankets (46%) were key contenders.

The winner of the award for most popular movie night “must,” however, was popcorn (51 percent).

“It’s no surprise that people are turning to virtual movie nights to replicate the sorely missed experiences of sitting in a theater on the edge of your seat, watching a riveting film unfold, or cheering on our favorite actors during awards shows,” said Wendy Boersema Rappel, a spokesperson for the Popcorn Board.

Top genres Americans have found themselves gravitating towards more often since the start of the pandemic included comedy (40 percent), action (40 percent) and drama (31 percent).

Additionally, 63 percent of respondents say the pandemic has given them an excuse to watch the “classic” films they’ve always meant to see.

“There are few pairings more classic than movies and popcorn,” Wendy added, “and while movie theaters and awards season are not on the table this winter, popping some popcorn and pulling out all the stops, seasonings and fix-ins for your own personal movie night is a great way to connect with family and friends over your favorite films until it’s safe to do so in person again.” 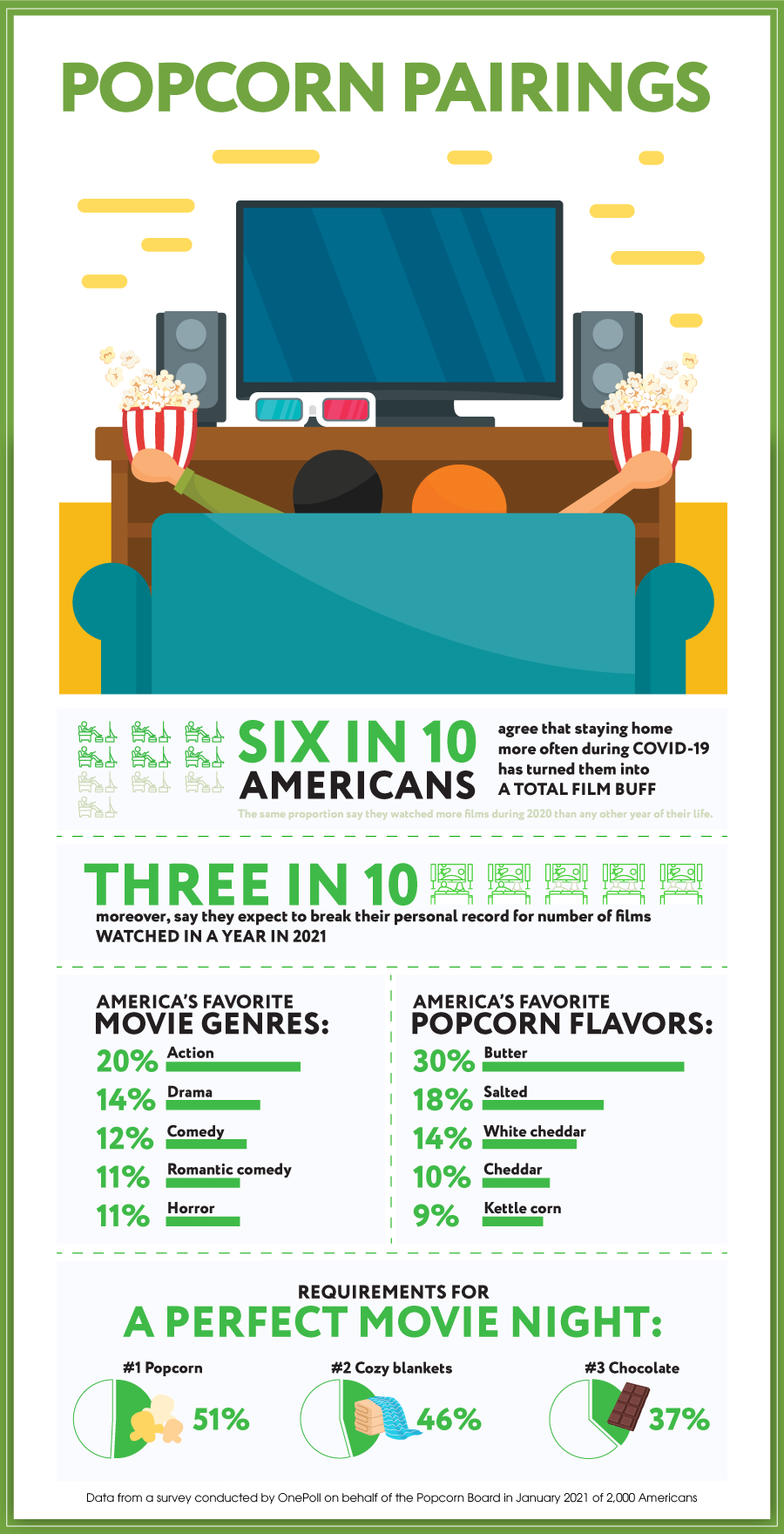 Toluna COVID-19 barometer reveals that Americans aren't afraid to shop in-store, are willing to pay more for items than normal