The skinny on sugar 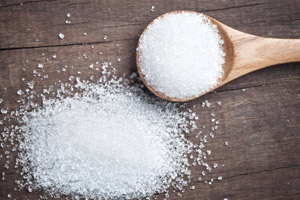 Sugar always gets a bad rap. It’s been accused of causing many diseases and conditions, from diabetes to tooth decay. (More later on why the latter is accusations, not facts.)

There are many kinds of “sugars” in our food supply:

Unfortunately, the terminology isn’t consistent. Some artificial sweeteners claim to be “natural,” even though they may be highly refined. Some, such as sucralose, comes from sucrose.

Sugar, natural sugars and sugar alcohols all contain from zero to 4 calories per g., while artificial and novel sweeteners rarely contain any calories. The latter are usually much sweeter than sugar, so less is required.

In addition to taste, table sugar provides water binding for preservation, adds texture and color to baked goods and bulk for ice cream, and balances acidity and controls crystallization. Saccharin, sucralose, acesulfame and Stevia can be used in cooking and baked goods.

The pros and cons

We hear a lot about “added sugars,” but what exactly does that mean? Unfortunately, definitions vary, but the U.S. Department of Agriculture (USDA) defines them as sugars added during processing or at the table, not innate sugars, such as fructose in fruit and lactose in dairy products.

Researchers analyzed 2003-2006 National Health and Nutrition Examination Survey (NHANES) data and found that two-thirds of the added sugars we consume are found in four major categories: Sugar-sweetened beverages (30.7%); sugars and sweets (13.7%); sweetened grain products (12.6%); and fruit drinks/fruitades (10.3%). They also found that 87% of Americans are consuming the Institute of Medicine (IOM) recommendation of 25% or less.

Are we consuming too much sugar in total, as some nutrition professionals would lead us to believe? The USDA Economic Research Service (ERS) estimates consumption of all caloric sweeteners in different ways. Often cited measures are by “deliveries.” In other words, these statistics detail the amount made available in the food supply, rather than what people actually consume. This data does not consider loss or waste during production, shipping and in the home. However, new ERS data “adjusted for loss” shows a decrease in consumption of all caloric sweeteners from 89.2 lbs. per capita in 1999 to 76.7 lbs. in 2011. Interestingly, this happened during a time of increased obesity and increased calorie consumption from all sources.

There are positive attributes to sugar besides the flavor enhancement of foods. Contrary to popular belief, sugar consumption doesn’t adversely affect children’s behavior. An analysis of 109 peer-reviewed studies showed no evidence that sucrose leads to hyperactivity.1  Research shows that sugar may improve cognitive ability in infants, the elderly and people with Down syndrome and Alzheimer’s.2

Sugars do add calories to the diet and can contribute to dental cavities, as do all fermentable carbohydrates without proper oral hygiene.

The bottom line is that sugar adds enjoyment to our lives and should be savored in moderation, as part of a balanced diet. SF&WB

Americans are trying to cut back on sugar, HFCS

ABA’s sweet on sugar reform vote but disappointed in outcome