Washington: The good and the bad 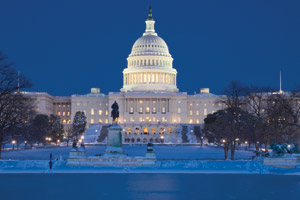 Frustration with Washington continues to mount, with the serious challenges facing our country. The recent debacle over the fiscal cliff has devolved into a series of “mini cliffs,” including sequestration, raising the debt ceiling and the fiscal year 2013 budget…not to mention the fiscal year 2014 budget.

While Republicans in Congress conceded the obvious and moved a short extension of federal borrowing authority, it was only a stopgap effort to allow them to regroup. President Obama, meanwhile, continues to focus on policy issues that register in the low single digits in terms of importance to American voters. All in all, it’s not a situation to inspire confidence that the country will get back on the path of sustained economic growth any time soon. Is it any wonder that bakers and other Americans are so frustrated with an often dysfunctional Washington?

Yet despite all of the macro issues facing our country, we are seeing some progress on issues important to bakers. A case in point is the U.S. Food and Drug Administration’s (FDA) recently released draft of preventative controls regulations to implement the Food Safety Modernization Act (FSMA).

During a recent Congressional debate to strengthen federal food-safety laws in the aftermath of the peanut butter recall, the American Bakers Association (ABA) worked to ensure the legislation protected consumers, but didn’t overly burden bakers. Working with Republican Sen. Richard Burr of North Carolina and others, the ABA succeeded in having costly user fees taken out and inserted the opportunity for FDA to exempt low-risk distribution depots. The bill that ultimately passed Congress succeeded on both fronts.

Since that time, the ABA has led a small coalition of food associations to work with the FDA on the distribution depot exemption. Last month, the FDA included the exemption in their draft regulations. This will save as much as $10,000 to $15,000 per bakery depot in unnecessary implementation costs. Bakers will be able to put those resources toward other, more productive, food-safety or sanitation efforts. It also allows the FDA to concentrate its limited resources on areas of greatest risk for food-safety incidents.

While the term “win-win” is tossed around a lot nowadays, especially with a wink and a nod in Washington, this project was one example of a true win-win for bakers, the FDA and ultimately consumers. The ABA will be laser-focused on these types of opportunities this year.

Robb MacKie is the president and CEO of the American Bakers Association (ABA) and the chief advocate and spokesperson for the $102-billion wholesale baking industry. A recognized leader in the Washington business community, MacKie serves as a board member of the Business Industry Political Action Committee (BIPAC) and is a member of the Chamber of Commerce’s Committee of 100. He also participates on the Kansas State University’s Grain Science Advisory Committee.

What does the Trump presidency mean to the baking industry?

Preparing for the Affordable Care Act