A trip to India 15 years ago proved fruitful, as it ended up being the origin story for Daily Crunch Snacks.

When Cynthia Reynolds returned from the Asian country, she shared with her sister, Diane Orley (co-founder of the brand) about the health and taste benefits of sprouted almonds that she encountered there. When you soak almonds in water for a long period, they “sprout”—the result is an easier-to-digest, more nutrient-dense, and crunchier almond.

Inspired by these health benefits and the tasty crunch, Diane began sprouting almonds and then dehydrating them, as opposed to roasting, at home. She would then flavor them with real ingredients. She loved the way they tasted, and she loved their health benefits even more.

Fast-forward to a few years later, in March 2020—right before the pandemic hit—and Daily Crunch Snacks was born.

Diane’s sprouted almonds piqued the interest of Laurel Orley, her niece, whom had plentiful experience in marketing working on Unilever’s flagship brands for 13 years, including Hellmann's, Lipton, Suave, and the Dove Campaign for Real Beauty.

After doing some market research and attending Natural Products Expo West, Laurel and Diane realized sprouted snacks were unique compared to snacks already on the market—after all, for the health-conscious consumer, a tasty, crunchy sprouted nut snack made with real ingredients, no oil, and no added sugars would be a dream come true. 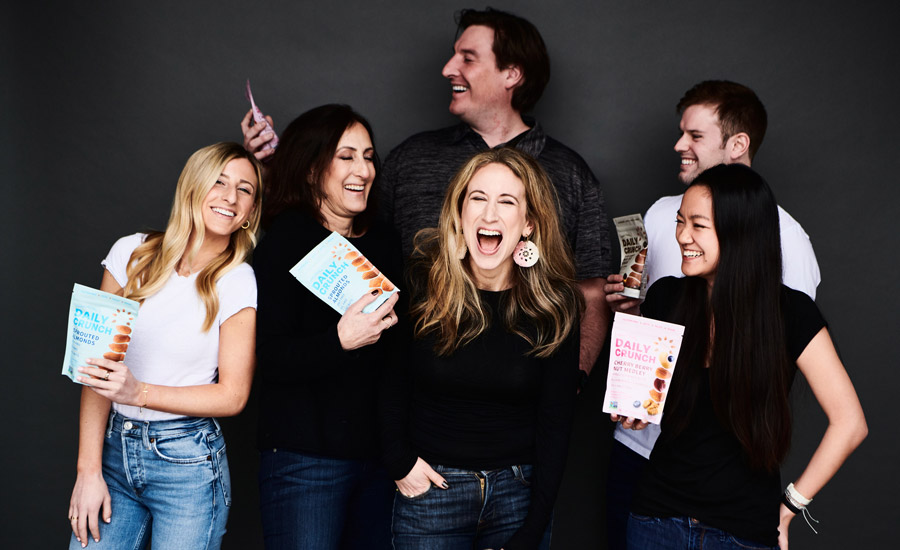 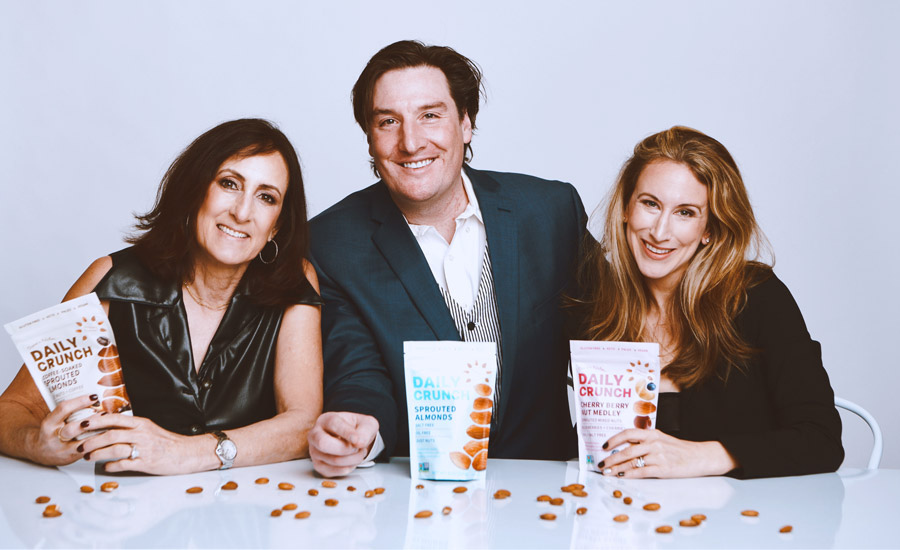 After a few years of recipe perfecting, brand development, and team building, Daily Crunch Snacks was born. The snacks are vegan, keto, paleo, and gluten-free, because the company wants everyone, regardless of dietary preference or need, to be able to enjoy its snacks.

The birth of sprouted nuts

Sprouted nuts are called “activated” nuts in England and Australia, the company found out, as it started doing research. After conducting focus groups and delving into consumer research, the brand decided to emphasize “sprouted” on its packaging versus “activated,” as it tended to resonate more with U.S. consumers.

“I had no idea that Diane's trail mixes were sprouted. I just knew that they had a texture difference—they were lighter, airier, and crunchier than raw or roasted almonds. I knew that there wasn't anything like them in the mainstream U.S. market,” says Laurel, CEO and co-founder.

The effort took teamwork: Diane learned the process of sprouting nuts and perfected it with her dehydration process, while Laurel took her 13 years of experience at Unilever to bring Daily Crunch to launch. 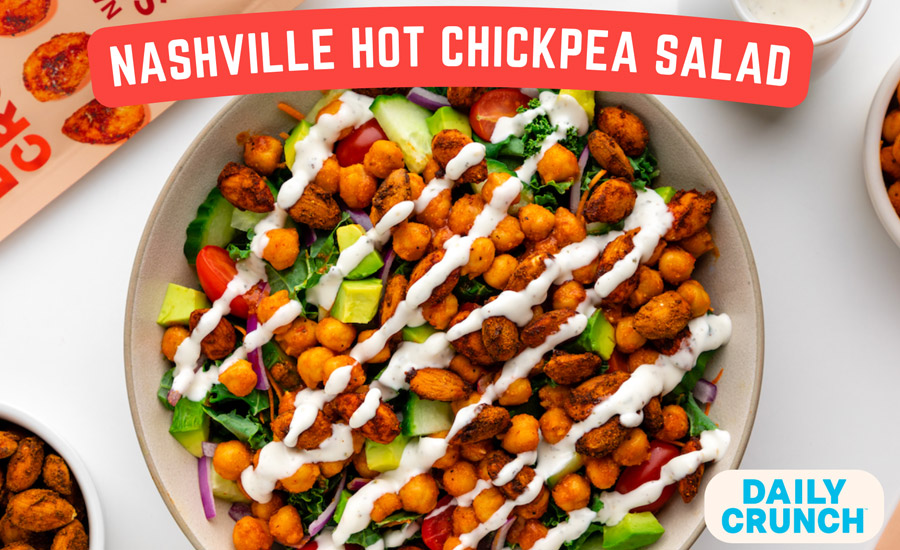 Laurel met the company’s third and final co-founder, Dan Stephenson, through the Entrepreneur's Organization in Nashville. Dan started consulting for Daily Crunch Snacks during the pre-launch phase as he was phasing out his mac and cheese start-up. It was clear from the beginning that Dan was the third piece of the co-founder puzzle, as he had immense retailer and operations experience.

When the brand first launched in March 2020, it had three SKUs: Cherry Berry, Cinnamon Java, and Plain Sprouted.

The “trusty but dusty” nut snack category, as Laurel puts it, needed some shaking up.

“Our innovation magic is that when we soak almonds going through the sprouting process, we can also add flavors to the water, which absorb or 'soak' into the almonds,” shares Laurel. “This is something our competitors cannot offer their consumers.”

For example, the brand’s Cinnamon Java flavor includes coffee-soaked almonds, and the almonds soak in organic coffee for over 24 hours, giving them a flavor combination that “works really well,” she says. 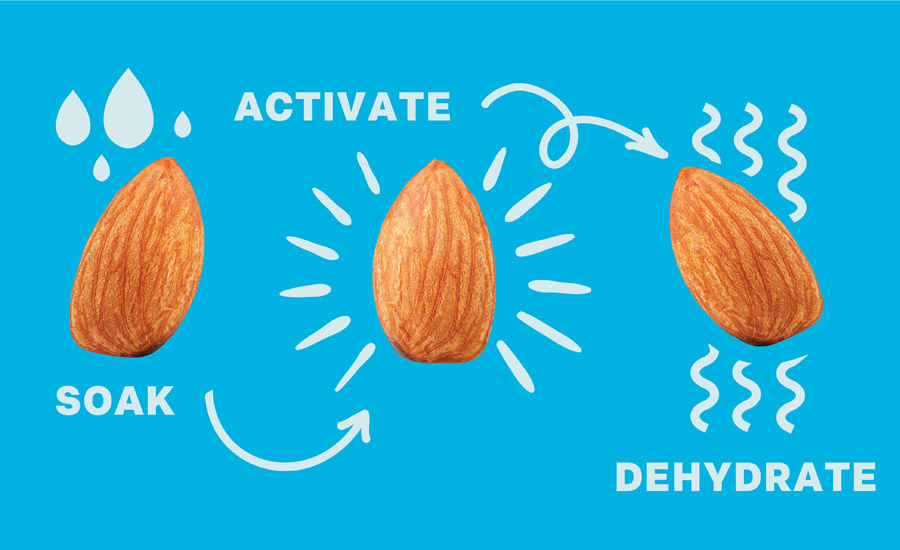 “Currently we do all of the R&D ourselves. We look at current trends in the marketplace and review industry trends, including Whole Foods’ annual trend report. For example, Whole Foods included turmeric as a key 2022 trend, and while we already had turmeric in our Golden Goodness flavor, we really leaned into communicating turmeric on-pack and in our marketing channels,” Laurel says.

It’s not enough to be just a trend, though, she says—the product taste has to “hit it out of the ballpark.” 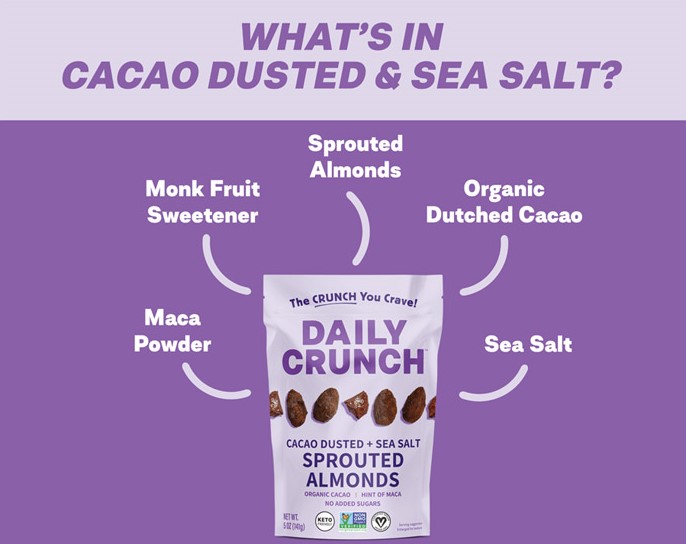 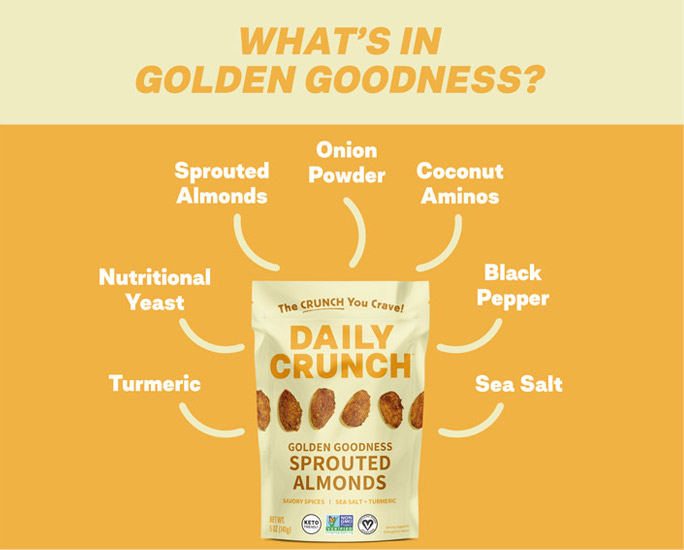 “If the team doesn't think the taste isn't out of the world, then our consumer won't. We are competing against not only start-up brands in the better-for-you and nut space, but also brands like Blue Diamond, and we really need our flavors to differentiate from what they offer, since we are more expensive. We need to give consumers a reason to try us and to want to buy us again. Daily Crunch does this not only by offering cleaner ingredients, but by offering innovative flavors.”

Since its launch, the brand has expanded its flavor selections.

“Dan came up with the concept of a Nashville Hot flavor and has helped lead the innovation front on the team,” says Laurel.

“Our new flavors embody the belief that snacks can taste as good as they make you feel,” says Laurel. “Through our sprouting process, we soak almonds in coffee to give the Cinnamon Java flavor a next-level taste that consumers want. The Nashville Hot flavor delivers a sweet-heat taste that’s packed with protein.” 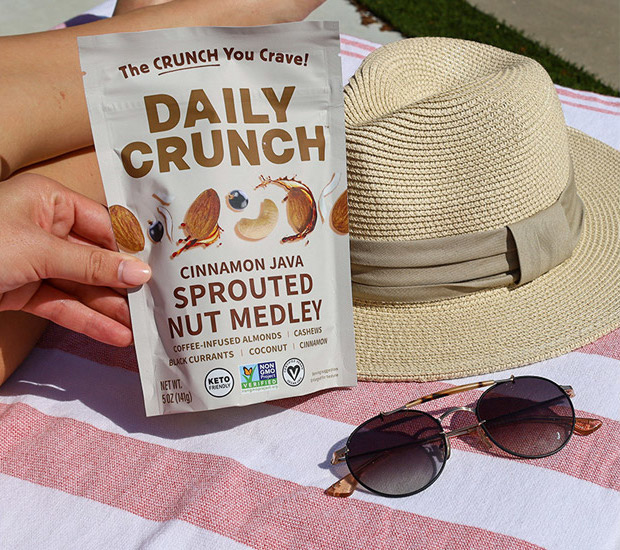 October 10 is World Mental Health Day, a day important to Diane, as she lost her son, George, nine years ago to mental illness. Diane dedicates much of her time and energy to reducing the stigma around mental health.

In support of Diane and the company’s mission, a portion of all Daily Crunch Snacks proceeds benefit The Support Network, which advocates mental health awareness on college campuses.

In early September, during Suicide Prevention Week, Diane posted an Instagram update talking about the brand’s mission. That week, Daily Crunch Snacks donated $1 for every bag sold to The Support Network.

“At Daily Crunch Snacks, we believe that mental health should be as much a part of the fabric of our daily lives as the food we eat. The thoughts and the nutrients you feed your body hold equal influence over your wellbeing,” says Laurel. 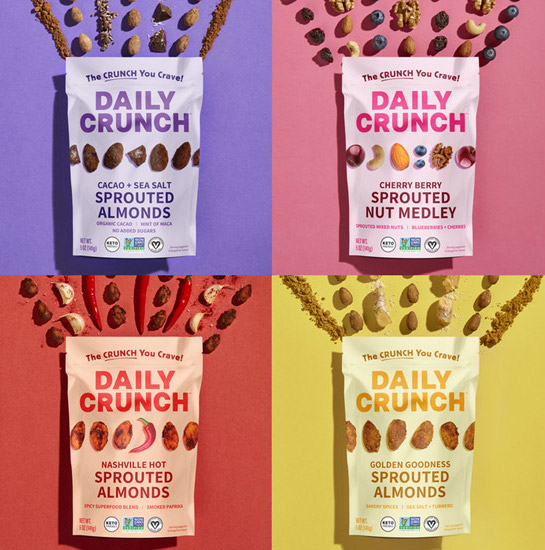 Daily Crunch’s hard work is paying off. Head of Marketing & Brand Strategy Kenzie Steel recently won a 2022 Progressive Grocer GenNext Award. The awards recognize individuals under age 40 who have demonstrated a commitment in the grocery industry, and display the qualities of innovation, leadership, and the ability to inspire others to achieve results.

Steel was originally slated for an internship at Mattel, but it was canceled due to the pandemic—and Mattel’s loss was Daily Crunch’s gain, as she started working for the brand as an intern in 2020. She graduated from the Vanderbilt MBA program in May 2021, and was the brand’s first full-time employee.

Daily Crunch is currently going through a seed funding round to support its growth, although it has had strategic growth in the natural, airport, and ecommerce channels. It was also featured in the October issue of Women’s Health, and its products can now be found in over 4,000 stores.

The brand will be launching two more flavors this year, but can’t reveal too much about them yet. 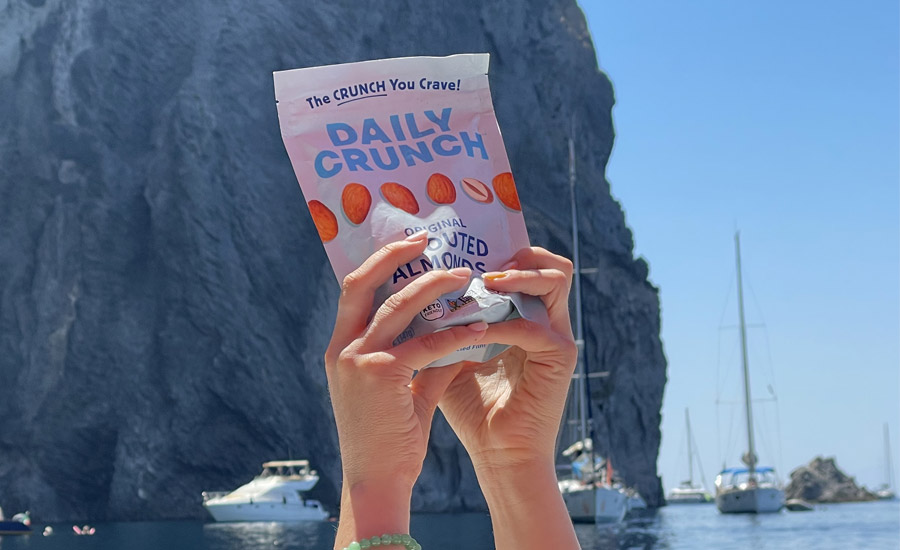 “We have two new flavors debuting the next few months, the first being a limited-time only exclusive flavor around the holidays,” says Laurel. 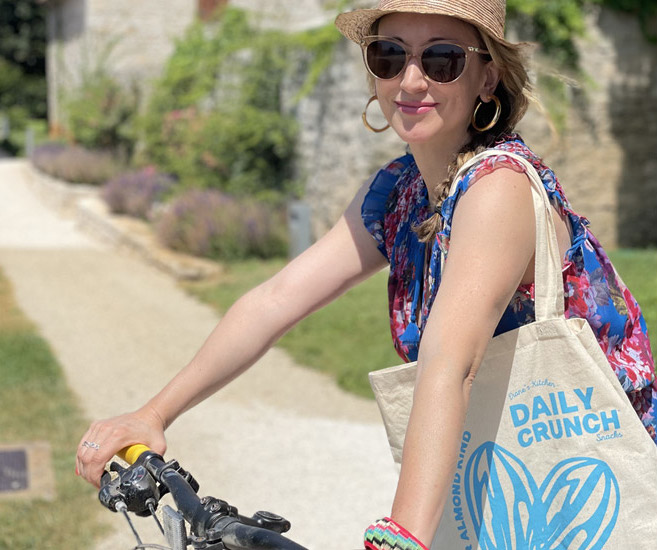 “The other flavor launch will be debuted at Expo West in March [2023], and while we don't want to give too much away, we can tell you that both of these flavors are more on the sweet side and are not currently offered in the mainstream U.S. market,” she notes.

In the meantime, the superfood sprouted nuts company will continue to innovate and meet its clean-label goals, Laurel adds. The brand has built its customer base by being a trusted health snack brand that “tastes as good as it makes you feel.”

“Customers know that when they order Daily Crunch they are receiving a delicious snack made with clean ingredients and their health goals in mind. We build our customer base by surrounding our marketing and social media efforts around nutritional information, healthy recipes, and an honest discussion about ingredients." SF&WB

Liz Parker is the senior editor of Candy Industry and Snack Food & Wholesale Bakery, and has worked at BNP Media since 2012. She has written for CBS Detroit as well as for her own blogs. She earned a Bachelor of Arts in Creative Writing from the University of Michigan. Liz can be contacted at (248) 839-7156 or at parkere@bnpmedia.com.