This website requires certain cookies to work and uses other cookies to help you have the best experience. By visiting this website, certain cookies have already been set, which you may delete and block. By closing this message or continuing to use our site, you agree to the use of cookies. Visit our updated privacy and cookie policy to learn more.
Home » 2018 Snack Producer of the Year: Carefree organic snacking with Late July Snacks
Special ReportsSnack ProductsTrendsSnack Producer of the YearBetter-For-YouClean LabelOrganicCrackersTortilla Chips

Late July Snacks, the 2018 ‘Snack Producer of the Year,’ brings carefree organic snacking to the masses.

Late July is the sweet spot of summer. It’s a soft space in time inhabited by carefree easiness, of sandy beaches, and long days of fun shared with family and friends. It’s the soothing lull of the persistent ocean cascading across the shore as the sun’s glow shifts from yellow to indefinable oranges, pinks and reds, transforming the already-idyllic scene into a small slice of serene paradise.

And, of course, it’s a time of snacks.

“I’m a Cape Codder, and Late July is that perfect moment in time,” says Nicole Bernard Dawes, founder and CEO, Late July Snacks, Boston. “You’re in the middle of summer, you’re very carefree. That carefree summer moment is really what an organic snack should be. They’re fun, they’re snacks—it isn’t something you should have worry about.” 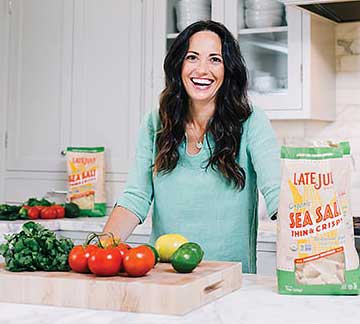 Over the past 15 years, Late July Snacks—the 2018 Snack Food & Wholesale Bakery “Snack Producer of the Year”—has steadily grown its business to its position today as a leader in organic, non-GMO snacks, most notably its strong level of innovation in the tortilla chip category.

And sales of organic foods are far outpacing the industry. In 2016, according to the Organic Trade Association, organic foods grew by 8.4 percent compared to 0.6 percent growth for food overall. In this favorable climate, Late July Snacks is well positioned to bring its products to an expanding shopper base increasingly hungry for organic snacks.

Born into the business

Dawes was born into the snack business. Her father, Steve Bernard, founded the iconic Cape Cod Potato Chips brand in 1980, and her mother, Lynn, ran a natural health foods store. “I was really fortunate in how my parents raised me. I was very aware of the business. They included me. I was always at the factory. There is so much I picked up over the years. I think that pretty much the only thing that the daughter of the owners of a health food store and a potato chip company can possibly do is start an organic snack company.”

An entrepreneurial spirit emerged in Dawes at a young age, and she started a small local cookie company at age 12. She went on to study management consulting in college, eventually landing in the marketing department at Cape Cod Potato Chips. 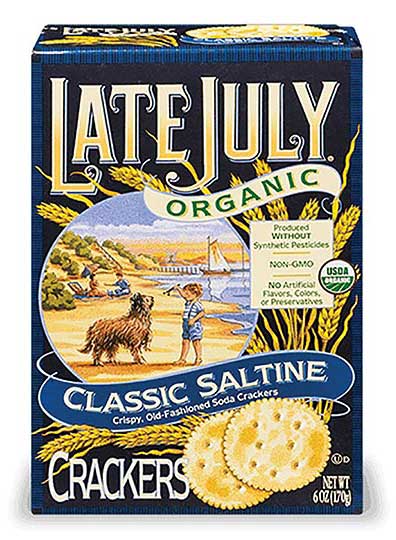 By the time she worked on the launch of Cape Cod’s first organic potato chips—and then reduced-fat potato chips—she was immersed in the dynamics of snack product success.

“I started understanding my potential in this industry,” she recalls. At the time, natural and organic foods were not known for their palatability and flavor qualities. “I was very interested in the way the product tasted.” She sought to push organic snacks further, to make them better for you—but also highly pleasurable.

When Dawes and her husband, Peter, were expecting their first son, inspiration struck. “I was living in New York City and was looking for organic saltine crackers.” Although several health food stores existed in her neighborhood, her search for organic saltines proved unfruitful. “I realized that the center of the natural food store was still stuck back in the 1970s. It just hadn't evolved like the perimeter of the store.”

And when Dawes did find organic foods in the center of the store, their appeal was often lacking. “They tasted like the cardboard they were packaged in. That’s when it hit me that crackers could be my way in, my starting point for the evolution that I wanted to see organic snacks undertake.”

Dawes and her father launched the first Late July products in 2003. She notes that her father taught her the vital necessity of snack appeal. “It’s absolutely critical that your product taste amazing,” she says. “That’s with me every single day at Late July.” She emphasizes the importance of sustainability and organic, non-GMO ideals—but that the snacks always need to have strong appeal. “There is absolutely no point in launching an organic snack that doesn’t taste better than what is out there conventionally available.”

“There is absolutely no point in launching an organic snack that doesn’t taste better than what is out there conventionally available.”
—Nicole Bernard Dawes, founder and CEO, Late July Snacks

Dawes fondly recalls that she and her father, who passed away in 2009, regularly cooked together. “We would go to 18 different grocery stores if that’s what it took to make the meal. He really cared about the foods he created—including his products.”

Something else Dawes observed during her time working with her father was the absolute importance of the people he hired. “He really cared about the people who were part of his team. He always hired the player, not the position. That’s what we try do at Late July, too. It’s important to have the right people on your team. You can teach a lot of things, but you can’t teach heart and attitude.”

Dawes feels personally and professionally compelled toward organic. “I really feel we have an obligation as food manufacturers to create products in the best way that we know how. For me, that includes using organic, sustainably sourced ingredients, because I believe that to be the best form of agriculture.”

A passion for tortilla chips

While crackers were the first products Late July launched in 2003, Dawes had always had an affinity for tortilla chips. 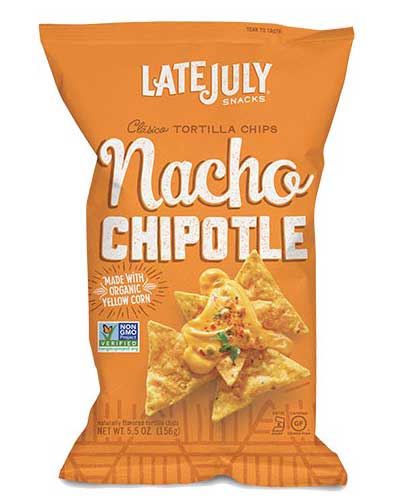 “Tortilla chips are my life’s work,” says Dawes. And this passion for tortilla chips developed at a young age—but was sometimes problematic in a family famous for potato chips. “We had a very strict policy that you couldn’t bring a competitor’s product into the house—or even eat them at a friend’s house. We were very brand-loyal, and we didn’t make tortilla chips. But they happen to be one of my favorite foods.”

Dawes notes that the idea of producing tortilla chips lingered in the back of her mind. “Nobody was making certified-organic tortilla chips that tasted amazing.”

In 2010, Late July launched its organic tortilla chips and hasn’t looked back since. “We decided to make tortilla chips our future,” says Dawes. “That’s what we saw as the direction of the company and where we really wanted to be as a brand.” 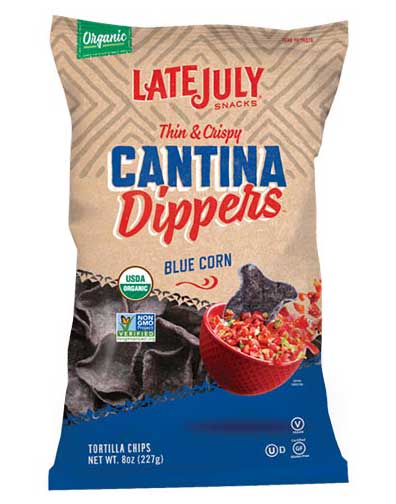 “One of the things that gives me joy is the fact that because we’ve grown, we’ve been able to become a really reliable customer for so many farmers.”
—Nicole Bernard Dawes, founder and CEO, Late July Snacks

“Nice, organic, multigrain tortilla chips and salsa is one of the healthiest store-bought snacks you can give yourself outside of fresh produce,” says Dawes. “You’re getting whole grains, vegetables from the salsa and good fats. It’s a really great snack. Something I’m incredibly proud of.”

It’s only natural that Snyder-Lance, which acquired Cape Cod Potato Chips in 1999, would end up partnering with the Late July brand. The company first invested in Late July in 2007, and then increased its stake in the business in 2014. 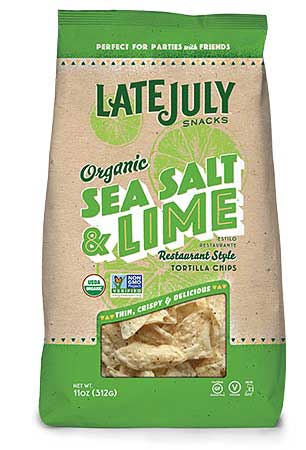 Before Snyder’s-Lance made its investment into Late July, it had served as the brand’s direct store delivery (DSD) distributor. “One thing that is very important to succeeding in the snack aisle is having a strong DSD partner, and that’s something that Snyder’s-Lance does incredibly well.”

Early on, the organic and non-GMO ingredient supply chain posed challenges. “When we first started out, it was so hard to get what we needed,” says Dawes. “We were very limited in what we could do. We had to innovate to make it work. Times were very different back then.”

The past 15 years felt like 100 in light of the progress the company made during that time, notes Dawes. “One of the things that gives me joy is the fact that because we’ve grown, we’ve been able to become a really reliable customer for so many farmers. There isn’t any instability with us as a customer. It’s really important to have a good network of people, making sure you have the right contacts.” 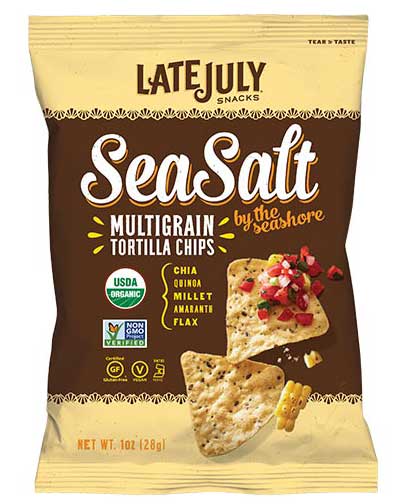 Dawes notes that 2009 was the most difficult year of her life. Not only did her father tragically pass away, but she then discovered that the terms of their business loan stipulated repayment three weeks later. “At the last minute of the last hour, I was able to find a bank to replace our debt.” She now advises other entrepreneurs to protect themselves and account for such potentialities when securing loans.

Dawes has emerged as a role model for young, emerging entrepreneurs. “You really need to be clear in your passion, understanding what you want to achieve, because that’s sometimes the only thing that’s going to help you get through,” advises Dawes. “Also, find a mentor. Find somebody you can call who will be honest with you and give you practical advice. I have a wonderful network of women who have started companies that I reach out to from time to time.”

An upstart, entrepreneurial, grassroots spirit still flourishes in Dawes. When testing a new product concept or ingredient, R&D often starts at home. “I usually try to make it on my own kitchen first and see what it tastes like, and then we’ll commercialize it.”

The market for better-for-you foods continues to evolve. “Families are looking for clean ingredients, transparent sourcing and an ingredients statement that is recognizable and you can feel good about,” says Dawes. 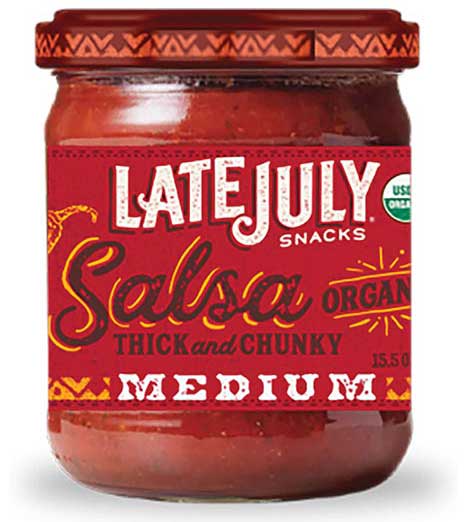 Late July persevered through the difficult years, and the business emerged with pronounced strength, growing its revenue year after year. Today, the company is a clear leader in organic crackers and organic tortilla chips. The gambit to invest the company’s future into tortilla chips has paid off in a big way—and the organic snack market is poised for considerable growth in the coming years. Now Late July’s growth will continue as part of Campbell Soup Co., which acquired Snyder’s-Lance in late 2017.

“If I look back at where we came from and where we are today, it’s amazing,” says Dawes. “But there’s still a long way to go.”

2022 Snack Producer of the Year: Kellogg Co. and Cheez-It crackers